The Isabella Oracle is self-published by Lynn Boyle of Aquarius Wellbeing. Lynn has been self-publishing oracle and Lenormand decks for a number of years now. Lynn now has 62 decks to her credit, 59 of which are still in print that she sells through her Etsy shop. She’s been a very busy bee! 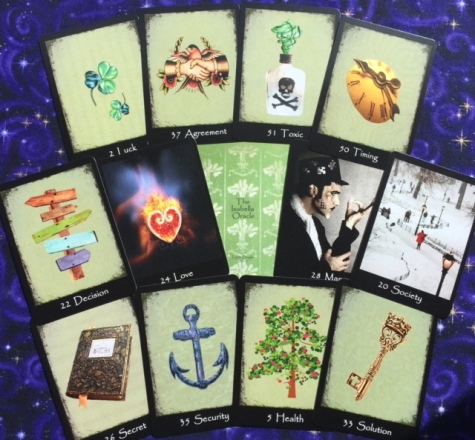 The Isabella Oracle consists of 54 cards packaged in an organza drawstring bag that is accompanied by a 3-page print out of card meanings in A4 size. The cards are typical Lenormand size and are printed with a semi-gloss coating with black borders. The card number and title appear within the black border centered at the base of the image. The style of the artwork is photographic using images within the public domain (i.e., copyright-free).

This portion of the deck can easily stand alone as a Lenormand deck. Lynn Boyle chose traditional Lenormand images for these cards with the exception of 8: Endings. Here, she has a skull with the traditional depiction being that of a coffin. Card number 10: Severing is depicted with a knife while traditionally a scythe is found on this card. Authority, the 19th card, which traditionally is called Tower and depicts a tower, in The Isabella Oracle here we have the figure of a king carved from wood.

Beginners would do well with this deck in particular because they are basically receiving 2 decks in 1, and having a keyword on each of the first 36 cards will also help them to learn the Lenormand system as long as they maintain a separate list of the traditional card titles. Card titles for all 54 cards nicely convey the core meaning of each card.

The remaining 18 cards transform The Isabella Oracle in a 54-card oracle deck. Card images are reminiscent of Lynn Boyle’s Aquarius Gypsy Lenormand. The card images and titles of the additional cards work well with the first 36 cards and nicely flesh out readings when all 54 cards are used. Card titles and images are as follows:

The cards shuffle easily and withstand rifle shuffling well. I have used The Isabella Oracle with equal accuracy as both a Lenormand and oracle deck. The black borders make the images “pop” and the deck looks lovely against a dark reading cloth. 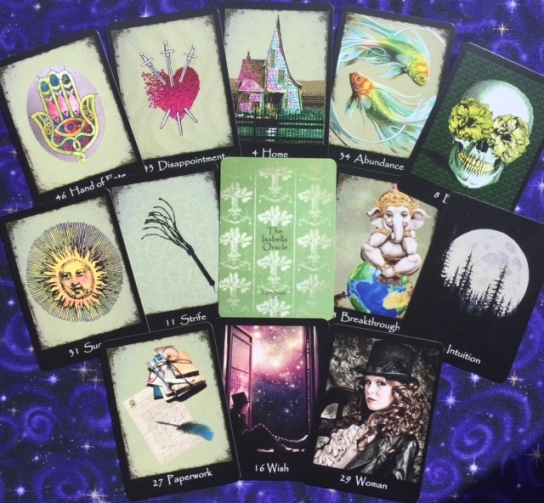 The Isabella Oracle is available directly from the deck creator at: https://www.etsy.com/au/shop/AquariusWellbeing where she has numerous 5-star reviews, offers 59 decks for sale, and has been on Etsy since 2013. I can tell you based upon my own experience she ships quickly & despite the package being shipped from Australia to Texas, it arrives quicker than what one would expect.

Wishing you many blessings!

Guidance & Inspiration From the Angelic Realm: my new oracle deck!

Full Disclosure: I received a copy of this deck from the publisher to consider it for review. I only review those decks and books that I find personally useful and feel would be of interest to my followers.