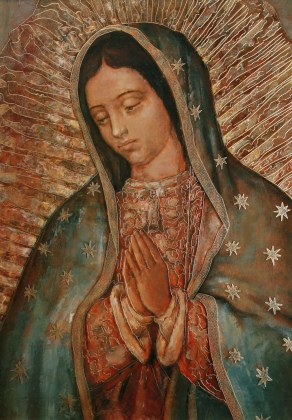 Today is the Feast Day of the Blessed Our Lady of Guadalupe, a symbol of Hope, Love & Healing for the Americas. For those of you who are unaware, the Virgin Mary appeared as mestiza (mixed Aztec & Spanish blood) woman on a hill sacred to the earth mother of the Aztecs. A poor peasant, Juan Diego had the vision. The Virgin blessed Juan Diego & told him to tell the bishop to build a church to Her on that hill. Juan Diego went to speak to the bishop & was laughed at. The next day he walked by the hill & once again saw Our Holy Mother. When She asked what the bishop said, Juan Diego told her. The Virgin Mary had Juan Diego take off his cloak and roll it up with instructions to not open it until he was again with the bishop. Juan Diego obeyed. When he opened up his cloak for the bishop many fresh roses fell out onto the floor of the church. Everyone knew this was a true miracle since it was the middle of winter & flowers were not in bloom. The bishop had the church built and within it is a painting of Our Lady on a cloth, that many believe is Juan Diego’s cloth and the image there was imprinted by none other than the Holy Mother Herself.

I can’t speak to the validity of who created the image, but I can tell you I saw a life-size PHOTOGRAPH, not the real thing, when it was on tour when I used to live in Corpus Christi, Texas. I suffered from a condition known as “night blindness” & was unable to drive at night. As I prayed in front of the photograph of the original painting I asked to be healed from the night blindness. Then a strange feeling came over me & I actually fell asleep in the pew. I had gone there in the afternoon and when I woke up it was dark outside. I was in a near panic knowing I now had to drive home in the dark. However, when I got outside I could see PERFECTLY FINE, and was STUNNED. While I slept I had been healed! I have not suffered from night blindness since.

I wasn’t just healed from the night blindness on that day.  I had no intention of visiting the image when it toured.  My dad had always been devoted to the Virgin Mary & he would tell me how much She helped him with all sorts of problems & that his prayers were always answered.  He would often try to get me to pray to Her, but I just didn’t feel a connection, but on that particular day I had a STRONG desire to go see the image & pray before it.  I am a non-practicing Catholic, and until that day I had not set foot in a Catholic church in 12 years.  I believe the Virgin Mary placed that desire to see Her image within my heart knowing I would then ask Her for a healing.  She not only healed me from the night blindness that day, she restored my faith, which is truly the greatest healing of all.

Snce then, the Holy Mother has blessed me many times over and granted me the greatest healing of all in Her basilica in Rome where I was healed of my 39-year old chronic knee problem, which you can read about here.

I share this with you all to help edify you and your faith in a Higher Power, whomever that Higher Power may be for They are ALL manifestations of The One. Here also is Pope Francis’s message for today, which he delivered yesterday via Vatican Radio.

I wish you all Peace, Healing, & Love in the Name of Our Holy Mother, the Blessed Virgin Mary, Mother of Christ. AMEN.

POPE FRANCIS: “Tomorrow is the feast of Our Lady of Guadalupe, the Patroness of the Americas. I would like to greet all my brothers and sisters on that continent, and I do so thinking of the Virgin of Tepeyac.

“When Our Lady appeared to Saint Juan Diego, her face was that of a woman of mixed blood, a mestiza, and her garments bore many symbols of the native culture. Like Jesus, Mary is close to all her sons and daughters; as a concerned mother, she accompanies them on their way through life. She shares all the joys and hopes, the sorrows and troubles of God’s People, which is made up of men and women of every race and nation.

“When the image of the Virgin appeared on the tilma of Juan Diego, it was the prophecy of an embrace: Mary’s embrace of all the peoples of the vast expanses of America – the peoples who already lived there, and those who were yet to come. Mary’s embrace showed what America – North and South – is called to be: a land where different peoples come together; a land prepared to accept human life at every stage, from the mother’s womb to old age; a land which welcomes immigrants, and the poor and the marginalized, in every age. A land of generosity.
”
That is the message of Our Lady of Guadalupe, and it is also my message, the message of the Church. I ask all the people of the Americas to open wide their arms, like the Virgin, with love and tenderness.” ~ Pope Francis