Paulina Cassidy in the Artist’s Spotlight

Paulina Cassidy’s artwork is very popular among collectors. She is known for her ink and watercolor paintings of faeries and whimsical nature sprites. Working from a sketch that evolves into a pen and ink drawing, Paulina then adds soft pastel watercolors to her pieces. Her artwork is collected around the world. Paulina Cassidy is also a mass-market published Tarot and oracle artist with two tarot decks and two oracle decks to her credit. They are:

In this blog post I review all four of her decks and sit down for an interview with the artist herself. My questions are in bold below and Paulina’s responses are in italics. My review commentary appears in regular type.

Were you formally trained as an artist or self-taught? How long have you been an artist?

I started drawing from the age of 3; quietly sitting at the kitchen table with paper and pen; happily lost in my own little world. At 14, I started creating cartoons for local newspapers, but altered my direction at around 17 when my style developed into something completely different than cartooning. I worked mainly with pen and ink for a number of years after that, as well as having created regular illustrations for magazines. In 1998, I delved full time into this when I launched my website, Restless Moon Gallery.  It’s an interesting process in discovering one’s artistic voice as we experiment and grow, whether one is self-taught or formally trained.

What sparked your interest in Tarot and how long have you been interested in it?

A number of years ago, a collector requested that I consider making a tarot deck. I thought the task to be too challenging at first, but I proceeded, regardless. I began working on my first deck in 2006/2007, and two years later, the Paulina Tarot was born.

US Games Systems, Inc. published Paulina Cassidy’s first work, The Paulina Tarot, in 2008. Housed in a simple tarot box with 44-page LWB (little white book), the entire set measures 3 x 5 x 1 ¼” and retails for $21.95.   The Paulina Tarot is a traditional 78-card tarot deck. Major arcana titles are traditional. Suits are Wands, Cups, Swords, and Pentacles. Court cards are the traditional Page, Knight, Queen, and King. The cards have a thin white border, card titles appear in black within the white border below each image, and the backs are fully reversible. The LWB, written by Paulina Cassidy, includes a brief description of each card’s imagery, and several keywords for both upright and reversed interpretations. Only one card spread is included, the traditional Celtic Cross.

The cards measure the same as the box and are very easy to shuffle. They have a semi-gloss finish that allows them to glide smoothly together without sticking together. The images, unlike some of her other work, is rendered in full color with the backgrounds completely painted in watercolor. The color scheme varies and is in general keeping with the theme of each card. Backgrounds range from lovely bright pastels to somber grays that gives the deck a balanced color scheme.

The imagery of The Paulina Tarot is highly intricate. The characteristic swirls, tiny flowers, stripes, dots, and other design elements of Paulina Cassidy’s work adorn each card. As an artist myself, I appreciate all the work that went into creating each image. In order to fully appreciate The Paulina Tarot I highly recommend that you avail yourself of the use of a magnifying glass. This is one of those decks that would have benefited from being printed in a larger size.

Within a spread the cards depict lively faerie and fantasy characters within a whimsical landscape. Natural elements, such as trees, flowers, and celestial bodies are anthropomorphized, which adds a great deal of whimsy to the images. Overall, The Paulina Tarot is highly detailed making it a feast for the eyes.

Your artwork is very intricate. Has this always been your style or did it evolve in recent years?

I’ve been creating intricate pieces for years, mainly using pen and ink. It’s always been a meditational process for me. As well, it’s an evolution filled with self-discovery. My wish is to evolve with each piece I create, always.

On average, how long does it take for you to create a card image?

It varies, and I sometimes re-do a card image until I’m happy with it. I seem to have no definite answer to this, as I tend not to keep track of time when creating. I sort of become lost in another world, another zone . . . somewhere out of time.

What inspires you and your art?

Anything that supplies my soul with a sense of mystery and magic. It’s a collective and intermingling gathering of energies found, for example, in music, books, nature, art, animals, people.

Building upon her love of animals, nature, and people, Paulina Cassidy followed up her Paulina Tarot with the Joie de Vivre Tarot, published by US Games Systems, Inc. in 2011.

Housed in a tuck box with the LWB written by Paulina Cassidy, the Joie De Vivre Tarot is yet another delight. The LWB has 59 pages with two blank pages for notes. Card interpretations consist of several keywords, a brief description of the imagery, the general meaning, and a brief reversed interpretation. The LWB concludes with a 5-card spread entitled, “Spreading the Joy.”

The major arcana cards are traditionally titled and the court cards are also the traditional Page – Knight – Queen – King. The suits are Wands, Cups, Swords, and Coins (Pentacles in The Paulina Tarot).

The Joie De Vivre Tarot is a deck that vibrates with a childlike joy, the beings depicted in this deck are “sentient souls of love who will help you tap into intuition and connect to divine source,” (LBW, p. 1). The characters themselves are emphasized with less anthropomorphic aspects than what appears in the Paulina Tarot. The majority of color lies within the brighter range of pastels and backgrounds tend to be less developed than in the Paulina Tarot so there is a bit more negative space giving the eye a place to rest while also emphasizing the main character depicted on each card.

You have a knack for portraying nature spirits. Can you sense their presence? If so, what does it feel like?

I often do sense their presence. It’s a particular uplifting shift in the atmosphere. I cannot see them with the naked eye, but I sense their personalities. They bring with them a certain purity, playfulness, and wisdom. Quite influential, and they love to be portrayed.

In 2012 Paulina Cassidy’s The Faerie Guidance Oracle was published by Llewellyn Books. Representing a slight departure from the whimsical creatures she had created for her Paulina Tarot and Joie De Vivre Tarot, The Faerie Guidance Oracle is her first oracle deck. The deck consists of a total of 40 cards and a 262-page guidebook, once again written by Paulina Cassidy herself. The deck is housed in a flip-lidded box of very thin cardboard. The book and deck lie nested within the box side by side.

Each card depicts a different faery with titles such as, Enlightenment, Determination, Faith, Compassion, Dreams, Intuition, Change, Energy, and Spirit. Titles are placed at the top center of the card within the border. Each card also has a brief 2-line synopsis of the card’s overall meaning at the base of the image within a light tan border that surrounds the image. Rendered in Paulina Cassidy’s distinctive style, the color scheme runs from dark blues and grays to sunny yellows and everything in between. The color scheme is nicely balanced. The images have a lovely ethereal look to them.

The guidebook is quite impressive. It begins with a brief introduction as well as “how to use this deck” section. There are two card spreads: the Facet du Jour, which is a card of the day; and, the Crisis Spread, for which the cards are chosen consciously instead of by chance and the number of cards in the spread can vary. The bulk of the guidebook consists of the card interpretations. There is a full-size black and white image of the card on the facing page. Paulina Cassidy then devotes 2 – 3 pages for each card’s meaning that then concludes with a “reflection” that relates symbols within the card’s image to the meaning of the card.

What advice do you have for aspiring deck creators?

Patience and consistency. These are two of my keywords for card deck productivity. The task can be daunting and will feel at times as though it’ll take forever. It happens to me with each deck that I create. Remember my aforementioned keywords during the long haul. Eventually, a finished deck will manifest, and it will have been worth every bit of effort.

Paulina Cassidy’s most recent publication is Witchlings, published by US Games Systems, Inc. in 2014. Witchlings is a card and book set that comes housed in a lidded box. The guidebook contains 201 pages with 3 pages for notes. There are 40 cards.

The cards have a narrow pastel border that vary in shade from card to card: purple, yellow, orange, green, pink, and other shades. Each card is graced with the whimsical image of a “witchling” who is an expert spellcaster of a particular type of spell. A little purple owl named Orion accompanies each witchling. Orion is “the universal Familiar of the Witchlings, acts as protector, mentor, assistant and friend” (p. 6). Orion is a benevolent energy whose spirit also assists all who use these cards. 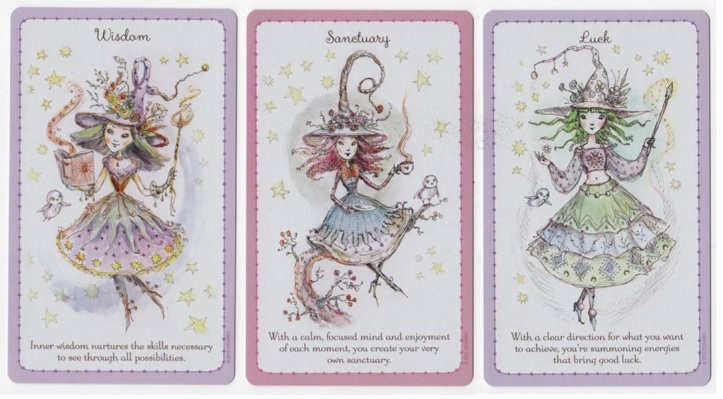 Paulina Cassidy designed Witchlings is no ordinary oracle deck. It can also be used in spell work. The deck can be used as an oracle deck and an oracular message is included for every card, but where this deck truly excels is in its use as a magical tool. There are 2 – 4 simple and short spells included for every card. The spells are performed with inexpensive materials that are easily available in the typical home’s spice cabinet. The spells are very short and simple to perform. You do not have to be a practitioner of magic to use this deck to its full capability.

Paulina Cassidy also wrote the guidebook. For each card the guidebook includes a 4-line poem, the oracular meaning, 2 – 4 spells, and for many of the cards inspirational creative suggestions and meditations are also included for the majority of the cards.

Overall, the work of Paulina Cassidy presents tarot and oracle readers alike with four delightful decks from which to choose. Her characters seem to come alive in the spreads and I love to see the interactions of the characters as they look at one another in a card spread. Delightfully dreamy, Paulina Cassidy’s body of work appeals to many around the world who are avid collectors of her art.

If you would like to be a featured artist on my blog, please email me at isisraanpu@gmail.com.

Full Disclosure: The decks reviewed here were a combination of those sent to me by the publisher and my own purchase.