Admirers of Schiffer Book’s decks will no doubt notice 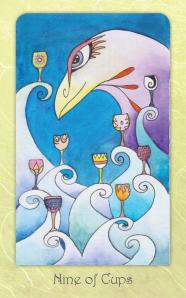 that with the publication of the Dream Raven Tarot and other recent decks of their spring/summer line that the sturdy cardboard hinged box with magnetic closure has become a bit smaller with also a change in the size of the accompanying guide book.  The guide book is basically square and measures 5 ¾” x 5”.  The deck itself measures 3 ½ X 6”, so it is long and may be a bit more difficult for people with small hands to shuffle.   The book and deck each rest within their own recessed well within the box side by side.  The box measures 6 x 9 x ½” so it’s the size of a paperback and due to the magnetic hinged lid you can store the box on its end as if it were a book and you never have to worry about the lid popping open spilling the book and cards.  The new box size now requires as much shelf space as a typical book and this will make storing decks much easier in my house, which has over the past few years become overrun with decks. 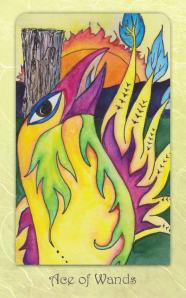 The Dream Raven Tarot has bright, vibrant colors with a raven depicted on each card.  The artistic medium is colored pencil.  Suits are Wands, Cups, Swords, and Pentacles.  Court cards are also traditional: Page, Knight, Queen, and King.  The major arcana cards all have traditional titles with the exception of the Hanged Man, which his entitled simply “Hanged” in The Dream Raven Tarot.

The guide book is nicely laid out with nearly full size black and white depictions of the major arcana cards on one page with their interpretations on the facing page.  The minor arcana cards are depicted in miniature as the entire suit on a two-page layout at the start of each of the chapters on the particular suits.  An enlarged etail of each card is illustrated within a semi-circle to the left (even numbered pages) and to the right (odd numbered pages) of each card’s interpretation.  All cards have traditional Rider-

Waite-Smith interpretations along with reversed interpretations.  Card backs are fully reversible.  Spreads include the Raven’s Claw (4 cards) and The Raven (6 cards).

The Dream Raven Tarot is a delightful deck that works well with every type of spread I have used – both traditional and non-traditional.  It’s a versatile deck with lovely energy.  Due to an unpleasant experience in childhood I am not a huge fan of birds.  However, I really enjoy using The Dream Raven Tarot and this will be a deck I return to in the future again and again, despite my massive collection.