This link is to a tarot reading at Façade.com that my Facebook friend, Rebecca Ann McKinnnon posted to my time line today.  Her question was:

This is actually VERY interesting. I never thought to ask the cards if the world will end on 12/21/12 because I know for a fact it won’t. The earth is moving upward in vibration & will be taking all those willing to also move up along with her. But, as I look at this spread it has some very interesting information & this is how I would interpret it: 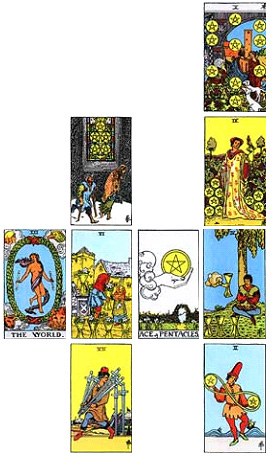 FOUNDATION: 2 of Wands (not visible in the graphic): people are being presented with a choice. Here, the choice would be to either accept the energy & move forward or to reject it & then face the consequences.

OBSTACLE: 6 of Cups: nostalgia for the past, yearning for how things once were. People need to realize change is inevitable & to look forward to these future changes instead of trying to keep everything the same. There is a very high fear vibration around the position in which this card appears. Many people are fearful right now, but it’s all due to a misunderstanding of the Mayan calendar. It beings a NEW cycle, it doesn’t end.

GOAL: 5 of Pentacles: outcasts, financial problems, destitution. Sometimes we have to take things to rock bottom in order to rebuild & I feel this card reflects the World Economy at large. So many countries going bankrupt, other countries facing civil strife. This is a purge or a cleansing, necessary before the new energy can come in.

FOUNDATION: 7 of Swords: known as the thief in the night, represents making off with what is not yours. To me, this represents the massive amount of misinformation that has been floating around the past 3 years, again, because people do not understand how Mayan calendrics work. They assume it is linear like ours. It isn’t. Their system measures cycles, like the inner workings of a clock. One cycle would be seconds, that clicks over to 60 it causes another cog to click over 1 position for 1 minute, 60 minutes is an hour so once that clicks over 60 times another cog will click over 1 position to measure the passage of 1 hour. Mayan calendrics is the same – they measure cycles within cycles & their calendar actually goes very far into the future. What ends on 12/21/12 is one cycle of time, but another begins the very next day. The 7 of Swords here is saying that misinformation is a very dangerous thing.

PASSING INFLUENCE: The World. Very intriguing. You can say the World represents cycles itself, this is a card of completing cycles. Yet you can also say it represents the earth herself. What we have here is the cards telling us the passing influence is a cycle that will affect the entire planet, but there is nothing here indicating that the planet itself will be a passing influence. The World is usually the end of one cycle & the beginning of another.

ROLE OR ATTITUDE: 2 of Pentacles: this is a card of juggling. It often appears when we’re attempting to juggle our responsibilities or finances. Here, for our attitude the 2 of Pentacles is saying we’re all going to be feeling the energy shifting & one minute we may be up, the next we may be down, but to just go with the flow & everything will work out just fine.

ENVIRONMENT: 4 of Cups: this card represents general dissatisfaction with the way things are going or of hoping for something better while ignoring the blessings you have. Regarding the current environment the 4 of Cups is telling us that the entire world is in the throws of major disappointment. Look at all the economic & political upheaval that has occurred over the past 3 years or so. All of this are birthing pains for the new earth that is attempting to emerge. Meanwhile, people are feeling increasingly dissatisfied with their governments & how things are being run & I feel we can expect more political upheaval in other countries over the next 2 – 5 years.

OUTCOME: 10 of Pentacles: an extremely positive card, the 10 of Pentacles represents a happy, healthy, prosperous family, a stable home environment, a good marriage. Here, as the outcome it’s telling us that despite all the upheaval going on, it is necessary for all the changes that are falling into place. Once the energy goes into effect and helps these changes along in a very short time I don’t think we’re even going to recognize our old way of living & of doing things. It’s all going to be so much different, & ruled by the light and higher frequencies rather than by negativity & the darkness.

There is nothing to fear.  Instead, we should all be eager and happy about the changes that have been occurring and will continue to unfold for us and for our planet.  Remember, you do not have to pay anyone to be sure you are to receive the new energies. Just state aloud in your own words you are open and willing to receive the angelic energies that have been coming to the earth via the Galactic Gateway.  That’s all that is required, no matter what anyone else may say who is trying to play on your fears in order to make a dollar.