A New Look, A New Perspective

As I am a typical Gemini who becomes easily bored, I decided to change the look of my blog.  I’ve opted for pink in celebration of the coming of Spring.  The image is also new.  It is a detail of the lower left corner of a Soul Portrait I just completed.  Below is the full image & the other illustrations throughout this blog entry are details. 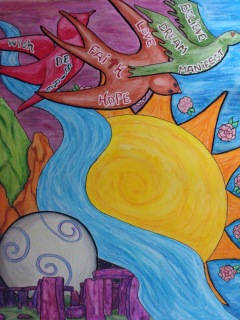 New Looks often stem from new perspectives.  The new look of my blog is no exception.  I really can’t explain what has happened to me.  I do believe it comes from Archangel Michael, who recently began channeling through me again after a nearly 10-year hiatus.

Have you ever felt that you just FEEL DIFFERENT?  Something just isn’t quite the same, but you can’t seem to put your finger on it?  That’s how I’m feeling.  Something is different.  VERY different.  I don’t know what caused it, nor can I figure out exactly what the difference is, but I sure can feel it.

For example, a negative trait of mine is that I tend to become easily frustrated.  This stems from not having a great deal of patience.  When I was pregnant with my daughter I was absolutely petrified that I would be a horrible mother because I have no patience.  However, it’s true what they say – God/The Universe never gives you more than you can handle.  Not only was my pregnancy a breeze, but the baby that popped out at the end of the long haul also turned out to be a breeze.  Sleeping through the night at 10 days old, never crying unless she was sick – I had everyone telling me, “you need to have another one so you can see what it’s REALLY like to have a baby!”  No, thanks!  One is enough.  Her pediatrician would be amazed when I’d bring her in sick to see him & she was just beginning to develop symptoms.  He would praise me on what a wonderfully observant mother I was, and lament that more mothers weren’t like me.  After two years of hearing all the praise I finally confessed that it wasn’t me at all.  It was my daughter. She happened to cry that day so I knew something was wrong.  He was flabbergasted that she never cried, only when feeling ill.  Her cry was always my alarm to call the doctor & her cry was never wrong.

However, it’s not all hearts & flowers.  My daughter is now 12 & last month became a little lady.  So she’s going through some very important and stressful changes.  We’ve begun to butt heads a bit like a couple of stubborn old goats.  One is a young goat just feeling her strengths while the other is an older goat who is now experiencing quite unwelcome body changes of her own, not to mention the mood swings, oh, but I digress …

I feel different.  I find my perspective has somehow been altered.   Things just don’t seem to be getting to me anymore.  I don’t feel frustrated when things don’t work out how I’d like.  It began a couple of weeks ago, very slowly, incredibly gradually, so that I didn’t notice and those around me didn’t notice, either.   Then as I looked back on those two weeks it dawned on me – where is the real me and where have the aliens hidden the pod???  Perhaps I shouldn’t go looking for it, I’m not sure.  All I know is I’m happier, more content, and much more willing to just let things be. 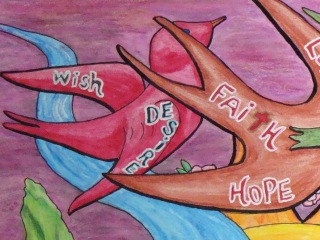 For example, the big clue something had changed occurred 2 weeks ago. I was rear-ended at a red light.  The old me would have cussed a blue streak, then I would have gotten out of my car all ready to confront the blind idiot behind me & give them hell.  Instead, I sat there thinking, “Whoa!  I’ve just been rear-ended, not too badly it felt, but still, I hope there isn’t too much damage.”  I wasn’t angry. I wasn’t upset, just concerned about my car.

I then looked in my rear-view mirror and it was OBVIOUS the teenage girl who had rammed into me had been TEXTING WHILE DRIVING.  Oh, there are few things that get my goat more than texting while driving!  It’s incredibly dangerous & you don’t just run the risk of killing yourself, but other much  more careful drivers & their loved ones, as well.

Normally this would have sent me into a fit of anger.  I probably would have jumped out yelling, “what the f* are you doing texting while driving, you f*ing idiot!”  Instead, my first thought when I realized what she had been doing was, “Oh, that poor dumb girl.  Can’t she figure out it’s not smart to text while driving?”

I got out & asked her to follow me into a lot so we could exchange insurance information.  She did & as we got out to talk I wasn’t angry. I wasn’t even upset, just a bit irritated that this was wasting my time.  I told her about the dangers of texting & she said she’d been stupid, she apologized, said it was her boyfriend & that she realized it could have been much worse & she promised me she wouldn’t text & drive again.  Turns out she’s really into Angels so I gave her my URL & took her email down & sent her the latest Newsletter since Archangel Michael is the dominant topic.  The damage was nothing on my Subaru Forester, but she’d scratched up her own fender of her Toyota Camry, or rather, her mother’s Camry. 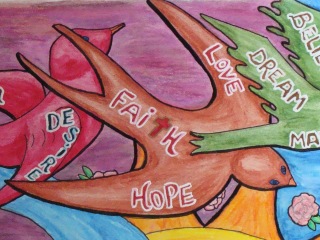 That was a big red flag that something was different, but I let it pass without dwelling on it. I went about my business.  Then Ariel’s dental office lost her appointment.  This happened 2 days later.  We arrived early & they claimed she wasn’t in the system.  Luckily, I keep the appointment cards so I showed them.  They did make good on it, but we had to wait 30 minutes to be seen.  In the past I would have allowed this to upset me.  I wouldn’t show it to them or my daughter, but while waiting I’d have thoughts like, “just more wasted time out of my life,” or, “I could be home doing whatever instead of wasting my time here.”   I always bring a book to read & instead of becoming upset my thought was, “Oh, well, now I can devote more time to my Stephen King book!”  My daughter also brought a book so it worked out just fine.

The BIG test came, however, yesterday.  This is when it hit me that something about me has changed.  My dad died of Parkinson’s and dementia September, 2009.  He had 3 brothers.  Only 2 would bother to call & check on him while he was so ill.  I never heard from the youngest.  When Dad died the youngest brother never called me.  He didn’t even bother to send a card.  My other two uncles called me.  Even my mom’s youngest brother (Mom died January, 2008) called to check on me & to offer condolences.  I told my husband if I ever heard from Ralph I’d give him hell for not bothering, for obviously not caring about his own brother.  It was made worse by the fact that my dad put him through college and now this uncle has a Ph.D. and is doing very well for himself.

Yesterday, the phone rang. I didn’t recognize the number on the Caller ID & was shocked when it wasn’t a solicitor, but this particular uncle.  He was all cheerful, asking how I & my family were doing.  I let him go on a bit, answered his questions, then I simply asked, “why didn’t you call while Dad was sick or when he died? He asked about you repeatedly & I called you several times.”  He stammered a bit, then apologized, acting the entire time like it was no big deal that his dying brother had desperately wanted to speak with him at least one last time.  I sat there listening to his lame apology thinking, “you poor man.  You’re so caught up in yourself that you see nothing wrong with this. I pity you.”  And I did.  I truly did.  I told him just that, too, exactly my thought word for word.  I told him there’s more to life than business success & having nice things & that I felt terrible for him that he failed to realize that.  I told him I’d pray for him to come to that realization before it’s too late.  Then I told him I wished him well, and I truly did, but would appreciate if he would lose my phone number.  Then I hung up and had a good cry.

When I told my husband about the phone call he was shocked.  He asked, “you didn’t  yell or scream at him?  You didn’t cuss him out?  What’s wrong with you?”  He assured me had he been the one to answer the phone, although he’s never met this uncle, he would have handled it in just that way.  My reply was, “why bother?  He clearly didn’t see anything wrong in his neglect of my dad, so why should I have made a federal case out of it?  It wasn’t worth the effort that would have required.  I’m just letting it all go because there’s nothing I can do about it.” 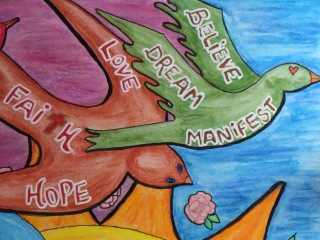 My husband’s response was, “Oh, my God!  There must be something seriously wrong with you!”

I beg to differ. I think there is something seriously RIGHT with me, but I just can’t seem to put my finger on it.  Perhaps I never will.  Do I care?  Why should I?

Until next time, wishing you and yours Many Blessings,