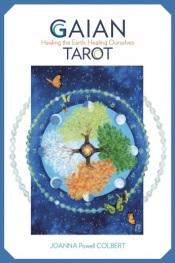 The Gaian Tarot may end up being your go-to tarot deck if you are interested in goddess and earth-based spirituality or if photo realistic art impresses you. Using colored pencils, Joanna Powell Colbert brings women of color, amazing animals, and gorgeous natural settings to life in her beautiful Gaian Tarot. Originally self-published, The Gaian Tarot has been mass-published by Llewellyn (now out of print) and most recently by Schiffer Books.

What I really appreciate about The Gaian Tarot, in addition to its themes, is how the art

spills across the border. You will see little elements that spill across the border. A plant, have of a fish’s body, leaves, part of the moon, fruit, vegetables, and so on. This gives the images a vibrancy and life that you don’t really see in most decks. It gives the impression of the images moving or of their energy spilling forth, especially when the cards are laid out in a spread. It’s a very interesting effect that I wish more artists would make use of, but perhaps that will become more commonplace in the future.

The Gaian Tarot comes housed in Schiffer’s very sturdy hinged box with magnetic closure lid that measures 6 x 9″. I love Schiffer’s boxes. The magnetic closure allows for the deck to be stored standing up on its end as if it were a book. It will not fall open on the shelf (at least none of mine have ever done that). It takes up very little room on a bookshelf or inside your tarot cabinet, as the case may be. As a person with around 300 decks I really appreciate this. 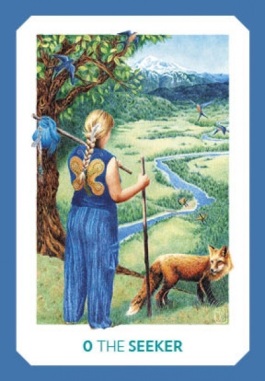 The cards are large so those of you with smaller hands may have difficulty rifle-shuffling them. The cards measure 4 x 5 3/4″ and the deck is 1 1/4″ thick.  Due to their size and the laminate they are difficult to shuffle. I do not recommend rifle shuffling this deck. The card stock is sturdy and has a nice laminate making it easy to spread the cards out face down on a table and shuffle them by simply moving them around instead of rifle-shuffling them. The deck has a silver gilded edge that looks lovely with the blue border on the face of the cards and the blue in the background of the card backs. 184-

Colors are rich and vibrant. Although created with colored pencils, most of the images look painted. The art  of Joanna Powell Colbert is truly lovely. The Gaian Tarot is on one of those decks that is a feast for the eyes. I enjoy simply looking at the images, though the deck itself provides me with insightful and accurate readings on a regular basis. It is one of my go-to decks; and, with such a huge collection on-hand, that says a lot for The Gaian Tarot. 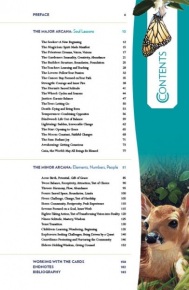 designed by the design team at Schiffer Books. The

seconds on the major arcana, four suits, and spreads are color coded along the upper right-hand edge of the book so you can easily flip to any particular section. All card images are in full color, but the image size is only 1 7/8″ high; otherwise, this would be a great guidebook for studying the deck. Card meanings for the major arcana consist of a narrative description of the scene depicted on the card, the meaning of the card should it appear in a reading, the “shadow” interpretation (in other words, reversed), themes, symbols on the card and their meanings, an affirmation, but the most useful section of each card’s interpretation in my opinion are the journaling prompts.

As you can see, each of these prompts are not only thought-provoking, but Joanna Powell Colbert brings up some very important issues we all need to get taken care of before the inevitable occurs.

The cards of the minor arcana are grouped according to their number. Each number opens with a list of general themes that apply to that number and several short paragraphs that provide additional elaboration upon the themes of each number. As with the major arcana cards of The Gaian Tarot, the interpretation of each minor arcana card includes a narrative description of the image, the upright meaning, the reversed, meaning, and affirmation. Minor arcana cards do not include journaling prompts.

The Gaian Tarot guidebook concludes with a chapter on card spreads entitled, “Working with the Cards.” Joanna Powell Colbert showcases several of her tarot colleagues in this section of the book by including their contributions for a number of the spreads. Spread titles include: James Wells’ Helpful All-Purpose spread (4 cards), Joanna’s New Moon spread (5 cards), Joanna’s New Moon spread # 2 (9 cards), Beth Owl Daughter’s Predict Your Future By Creating It spread (6 cards), Joanna’s Seeking Clarity spread (10 cards), Joanna’s New Year spread (7 cards), Joanna’s “Elder of Fire/Whispers of the Ancestors spread (5 cards), Carolyn Cushing’s Soul Practices with The Gaian Tarot: Path, Practice, & Posture spread (3 cards) followed by her Aligning with the Earth spread (7 cards), and James Wells’ Gaian spread (4 cards). The guidebook ends with a half page of end notes and a 2-page bibliography.

The Gaian Tarot is softly feminine. The overall energy of the deck is quite calming and

soothing. I can approach this deck with a question about a matter I find upsetting, but as the reading unfolds I fall under the deck’s calming spell and suddenly the problem doesn’t seem to loom so large. I find this deck to have healing energy. So much can go into a card via the intention of the artist. I have not asked Joanna Powell Colbert if she intended this deck to impart calming, healing energy to those who use it, but I’m willing to bet that was part of her intention behind her creation of the images. I can certainly feel it every time I work with The Gaian Tarot.

Anyone who works closely with the Goddess and earth-centered spirituality, who loves animals, has respect for other life forms with whom we share this planet, will love The Gaian Tarot.

Wishing you many blessings!

Guidance & Inspiration From the Angelic Realm: my new oracle deck!

Full Disclosure: I received a copy of this deck from the publisher to consider it for review. I only review those decks and books that I find personally useful and feel would be of interest to my followers.