Tarot of Dreams by Ciro Marchetti is one of my all-time favorite decks. Previously available 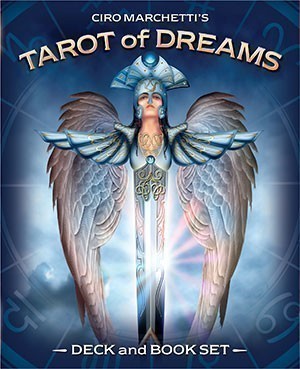 only as a self-published edition by the artist, Tarot of Dreams is at long last available for the mass market. I am very happy to see this deck receiving the exposure it so richly deserves.

Published by US Games, Inc., Tarot of Dreams is housed in a very sturdy lidded box measuring 5 ½” x 6 ¾” x 1 ½”. The box has a smooth matte finish and depicts isolated elements of five card images along the edges, five full card images on the back of the box, four partial card images, and a photo of the cover of the guidebook that showcases the Knight of Wands. The cover of the box is graced with the gorgeous image from the Ace of Swords card.

Within the box the guidebook rests on top of the cards that are divided into two stacks that fit smugly (but not tight) within the box. The two stacks of cards rest against each other. There is no divider to keep them separate. I recommend storing the deck in a horizontal position in order to prevent the cards from sliding into one another and shifting within the box. My copy did arrive with both The Fool and Magician cards slightly dinged, which probably occurred due to shifting during shipping. The cards have a matte look to them, but the finish is a semi-gloss. They are not exactly slippery as are many other decks, but my copy has been shifting on me so I now make sure to store it horizontally so card shift does not occur. For those of you who are like myself and are a stickler for keeping your decks as pristine as possible, you will most likely wish to do the same.

The Tarot of Dreams guidebook is written by Lee Burnsten who has written companion books for The Gay Tarot, Universal Marseilles Tarot Companion, and The Zodiac Tarot. The guidebook measures 5 ¼” x 6 ¼” and contains 112 pages, including two pages for notes. The guidebook is organized into eight sections:

The Story Spread is the only card spread described within the guidebook. It consists of nine cards and for those of you familiar with the Lenormand Square of 9 spread, the Story Spread is arranged in a similar manner.

pper corners of each card. These attributions of symbols to the cards follow the standard established by the Order of the Golden Dawn with the exception of the addition of the three planets discovered in modern times: Neptune, Uranus, and Pluto. Symbolic representation of these three plants is also included in lieu of the Golden Dawn’s use of elemental symbols.

For the minor arcana the Decan system of the Golden Dawn is retained. Pages are assigned the three zodiac signs that correspond to their particular suit. The knights, queens, and kings are assigned zodiac signs following the Golden Dawn’s associations, meaning that each card is designated as representing two-thirds of one sign and one-third of another. The astrological association for each card is described in the guidebook.

representation of the seriphoth appear along card borders no mention of the Tree of Life card is made. There is no meaning or interpretation ascribed to it. I realize it was included in order to provide a visual aid in order to illustrate the correspondences between the Tree of Life & cards of the major arcana. It also serves as an excellent aid in meditation if one decided to use it in that manner, but due to its lack of an interpretation I recommend removing the Tree of Life card from the deck prior to a reading.

The major arcana is discussed as the Fool’s Journey. Card interpretations consist of keywords and brief phrases followed by a lengthy discussion of the imagery and symbolism contained on each card. The card interpretations conclude with a mention of the corresponding Hebrew letter and its meaning in brief, plus the planetary association of the card. The minor arcana are fully illustrated throughout with imagery that lends itself well to first-time Tarot readers.

There is an extra set of court cards entitled “Palace.” The Palace cards provide an environment for the court cards as well as for the characteristics of their particular suit.

I recommend this deck to both beginning and advanced Tarot readers. The imagery is lovely throughout and due to the presence of black border on all the cards the colors have an additional vibrancy.

If you are a fan of Ciro Marchetti you will know that The Tarot of Dreams has been self-published by the artist several times. The self-published editions are prized and are strictly for my own personal use. I have all previous versions of the deck and am happy to now have a mass-produced and less expensive edition that I can use with clients. My clients really enjoy the imagery and find it easy to comprehend even if they have no experience reading tarot. The Tarot of Dreams is very user-friendly.