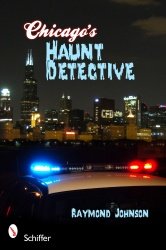 Chicago’s Haunt Detective
Raymond Johnson
2011  http://www.schifferbooks.com
ISBN #: 978-0-7643-3718-5
PB $16.99
If you like true ghost stories AND true crime, then this is the book for you as it nicely combines both in what is a very entertaining read.  The author, Raymond Johnson, is a former police officer.  The book opens with his accounts of his own paranormal experiences that occurred in his childhood home.  All of the recounted stories in this book are told with some humor usually inserted as parenthetical remarks that make the book sound like this is a friend telling you some cool ghost stories over a beer rather than reading them out of a book.  For example, in discussing his own scary experience the author notes that covering one’s head with a blanket “is, of course, the first line of defense” against an earth-bound spirit (p. 17).  That’s just one example.  There are plenty more, but always included with good taste.
The book opens with the classic story of “Resurrection Mary.”  A personal note about her, before I continue.  I’m originally from northern Illinois (Waukegan) and a number of times my friends and I hung out across the street or a bit down the street from Resurrection Cemetery hoping to catch a glimpse of this very famous phantom.  We were always disappointed, but I do have a friend who claims to have seen her while in the car with his brother.  Mary was standing alongside the road as they were approaching the cemetery evidently thumbing for a ride.  Although my friend was willing, his brother would not slow down to pick her up.
Resurrection Mary is a special ghost story because she has become beloved by the locals and the location and her true identity have been a closely guarded secret since the 1930s when she first passed away and then began putting in post-mortem appearances.  The author states that he received threatening emails because they thought he was out to debunk her existence.  He notes in reference to the scary emails, “[a]nd you thought ghosts were scary …”    As a former local of the area I found that to be quite interesting as I have myself seen the locals behave very protectively towards her.  They are not too willing to speak of her except to say she is there and yes, she is very real.  Raymond Johnson offers several hypotheses as to who the real Mary could have been along with supporting evidence that I found to be all quite interesting.  His conclusion is the same as the one I drew years ago.  It doesn’t matter who she once was in life, the fascinating thing is that she still appears long after her death.
The book is presented in a forensic style including eye witness accounts, the historical background of the event or ghosts involved, examinations of death and census records, and the historical background of the haunted location.
Other stories in the book include:  a ghost who solves her own murder (again, presented with eye witness testimony and evidence), and the use of a Ouija board that may have lead to the main user’s untimely demise.   The book concludes with a section about modern-day paranormal investigative techniques and a chapter on the use of psychics by the police.
The book is 160 pages long including an index, bibliography, and photographs.  The author’s sense of humor is evident throughout the book.  His expertise as a police officer who spent a career collecting and analyzing evidence is also very much apparent.  Chicago’s Haunt Detective is an enjoyable read throughout and I highly recommend it to those of you who like a good ghost story and also are interested in modern-day paranormal investigative technique.
~ Nefer Khepri, Ph. D.
http://www.magickal-musings.com&nbsp;
IsisRaAnpu@aol.com